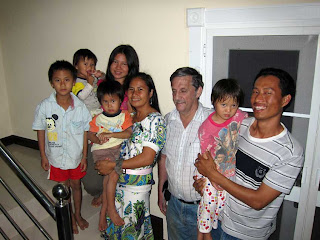 Jong's family with mine

Chiang Rai Trekking And Guiding Service (see www.chiangraitreks.com)
Trekking – day trips or longer, to visit mountain-top hill-tribe villages, waterfalls and the unspoiled nature of the Thai province with the most national park area – has long been a favorite tourist activity here. And Ah-Jong has long been one of ChiangRai’s best guides.
Jong is what friends call Sompong Laophong, a Government-licensed professional trekking and jungle guide based in ChiangRai City of in Northern Thailand. The forests, jungles and mountain areas of the Golden Triangle area there are world renowned for their unique cultural and biological diversity. Jong can show you the wonders of this special region, scheduled to your particular interests, abilities and needs, whether as a tourist, professional scientist or naturalist, as an experienced mountaineer or just as a day tripper. For those interested in the cultural offerings, history, temples and monuments of Lanna, as we call our region, a variety of specialized tours to satisfy your curiosity and enliven your stay in Chiang Rai are available. Jong is multilingual, fluent in Thai, Mandarin Chinese and Akha, and also speaking English and Lahu. He’s especially knowledgeable of the natural resources of the area, ranging from the identification of medicinal and edible plants to indigenous birds, mammals and insects... and is well-known in many traditional villages.
Contact: Tel: (66) 081-111-2733, e-mail: chiangraiguide.jong@gmail.com 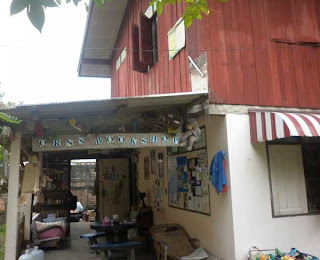 Orn’s Bookstore, at 1051/61 JetYod Soi 1, Chiangrai 57000, tel. 081-0220818 (English) or 086-0624080 (Thai), offers the best book-exchange deals in Thailand. The manager, Peter (Orn is his wife), an Asia old-hand (like myself, 20 years here), hails from a small village in the Black Forest of Bavaria, but speaks fluent Thai. He lived in Malaysia then ran ChiangMai’s Supreme Guest House for a decade, amassing a large collection of books left behind by tenants. Return and exchange deals are more than fair, tea can be purchased, and there are lots of friendly cats – when in Chiang Rai, be sure to pay a visit! 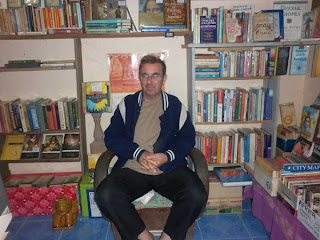 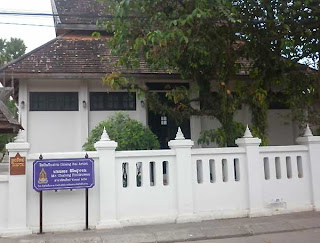 Chalong Pintsuwan’s Tai Yuan Art Gallery, 250 Mu 15, Rajyotha Road Soi 3, Chiangrai 57000 (call in advance for appointment, 053-712137 or 089-631-9438, e-mail Taiyuan_artgallery@hotmail.com) is my candidate for Chiangrai’s best gallery. Many artists are represented, including most of the area’s significant ones, and upstairs, in his studio, is a fine collection of fascinating local artifacts. 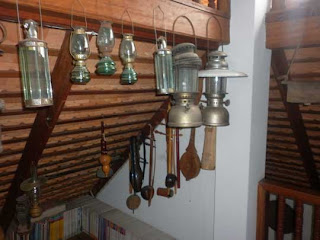 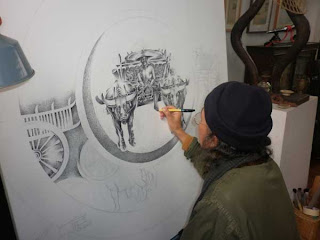 
Although Taksin’s absurdly misguided OTOP (One Tambon One Product) policy did much to degrade the quality of Thai crafts (having made my living at the time through crafts export from here, I have some expertise on the matter), there remain a variety of interesting artistic forms on sale in ChiangRai. Weavings, basketry, silverwork, jade, wooden frames, wood carvings, pottery and tea pots, amulets, effigies and other talismans can all be found at the night Bazaar, along Tanalai Road, Highway 1, and at Wat Jedi Luang (next to the National Museum) in Chiang Saen. The Silver Birch shop on Pahonyothin Road by the soi to Wat Jet Yod is by far ChiangRai’s best general crafts store, with some truly amusing items. Don’t forget, Buddha images usually require an export permit.
Posted by Mythorelics at 10:11 PM No comments: 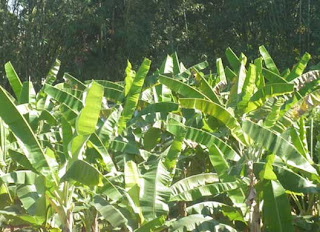 The short, stubby bananas common here in ChiangRai (gluai nam-wá, the fatter, shorter, firmer, less sweet kind) are much healthier for you than the long, Chiquita-type ones (Gluai hohm ‘fragrant’ Cavendish commercial bananas), and are often tasty too. There’s little better than fresh fruit taken immediately from where it was growing, and bananas are easy.
There are about 30 Thai banana varieties, including “egg” (gluay kai), “100 bunches” (roy wee), “fragrant gold’ (hohm tong) and “sandalwood” (jun); they change in color over time, but when ripe some are red, purple, orange or a very light green. 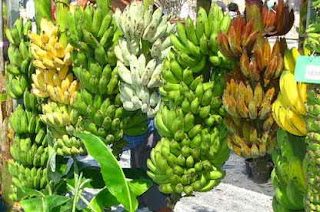 Plantains, cooking bananas, are drier, more starchy, and used like potatoes (they taste similar). Thais use almost every part of the banana tree in addition to the fruits. Pigs and chickens like the fruit, and the leaves, large, flexible, and waterproof, are often used as ecologically friendly, disposable food containers (“ serving plates”), or for food wrappers, roofing material, ceremonial lanterns and even to polish floors. The leaves are also used as steamer cups for ho mok pla, a spicy paté made with fish and coconut milk. They can be fed to horses, cows and other grazers (even ducks, which especially like the new shoots or sprouts, known as suckers, which grow from a big underground rhizome called the corm – in English, anyway). Banana flowers are used in Thai salads, or minced and deep-fried into patties. Grilled “barbecued bananas” are often sold on the streets, the fruits are simply peeled and roasted over hot coals. Banana breads, cakes and that backpacker standard, the banana pancake, are also popular.
Banana inflorescence, the banana heart, from which the fruit develops (in a hanging cluster made up of tiers known in English as hands, in Thai as a wii), have up to 20 fruit to a tier; bunch applies to parts of a tier with 3 to10 adjacent fruits. Edible banana flowers that are popular in Southeast Asian cuisine, but if you try to eat a flower from an unsuitable variety, it’s quite unpleasant. 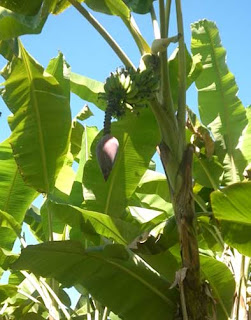 One of the world’s oldest cultivated fruits, bananas may have originated in southern, peninsular Thailand. More likely, it occurs to me, they developed in the Sunda Shelf area, when the oceans were lower, but perhaps in Borneo. Technically not a tree (they’ve no bark), but an overgrown herb (gingers and bird-of-paradise flowers are banana relatives); banana trunks are leaf stalks wrapped around each other. New leaves start growing inside, below the ground; they push up through the middle. So does the flower, which finally turns into a bunch of bananas, which can be yellow, purple or red. The banana plant flowers after 9 to 12 months, depending on the climate; most bananas require at least 20 months to fruit.
The banana is the largest herbaceous flowering plant; tall, sturdy and often called a tree, their main stem, or “pseudostem”, grows 6 to over 7 meters (to almost 25 feet). Each “tree” produces but one bunch of bananas. Then it dies, but usually offshoots (corm) develop at the base of the plant. Locals will often cut the stem down, and use it to fertilize other banana plants, at the time they take the bananas. If a "tree" is cut early, it can grow out again, and still produce a banana bunch.
Sometimes the plant needs support to not topple over. 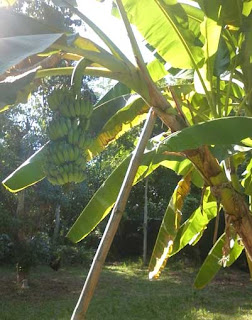 Bananas aren’t as closely related to grass as is bamboo, but there’s similarity. For reasons unclear to modern man, they stopped sexual reproduction about a century ago. If you’ve got a few banana trees, and want more, want to learn to care for them well, best not to look to me – better to find a local! But, as local agriculturalists often prefer to use only Kham Muang or their tribal language, I’ll clue in to the little I’ve picked up.
First - banana tree water (often from condensation, which sits where leaves join the stem, absorbing sap). Avoid it. Won’t hurt your skin or anything, but it will permanently stain your clothes with dark spots. Bleach, vinegar, lemon-juice, hot water and soap – nothing. No results at all. Even sunshine doesn’t fade the stains. You can try an immediate rinse, and sun drying, and get some success, if you do it fast enough (less than 10 minutes, better, less than 5) but once the stain is there, it’s permanently there. Be advised: wear old clothes before cutting any part of the banana plant!
Second – what should you try to do? Well, get rid of the yellowing leaves. Green leaves can be sold, yellow leaves can be put between banana trees (but be careful not to cover the young ones that, while still above, they were preventing sunlight from reaching). To do this, you need a curved rice-harvesting knife, and a long PVC pole. Duct tape (amazingly, not intended to be used for sealing duct-work; it can, however, be used as a bandage...) might help to attach the two, but a long piece of wide, stretchable rubber will do better. String, wire… might as well try WD-40. I've gotten best results with a pvc pole and a screw through a small hole in the handle of the curved knife. 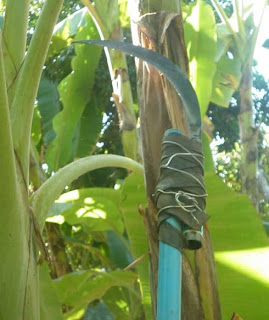 Third – in the dry season, water them. Avoid over-watering, which results in rot. Just get the bottoms of the trees wet on an irregular basis and you’ll be fine. Neighbors have ditches between rows of bananas, into which they occasionally pump water, but to me theirs seem to grow more slowly than mine.
Mulch them by piling on lots of organic matter, let them shelter each other instead of standing alone and exposed, and hope for moderate weather with no extremes like flooding or string winds. You need to cut off dead leaves, trees that have produced already and unhealthy trees to let in light, especially for new and young trees; also, here in Southeast Asia, at least, people begin to see ghosts in banana groves when there’s too much dead and dying material hanging around in them!
Fourth – don’t worry too much about the central Thai superstition of ghosts haunting banana plantations: here in the north we don’t often have that problem! Well, once, but nevermind that. Bananas are, though, slightly radioactive; they’re high in potassium, and all naturally occurring potassium contains small amounts of radioactive potassium-40. 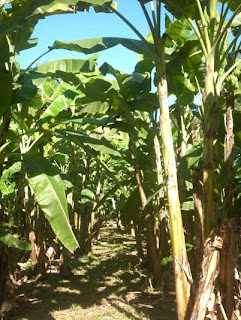 The purple pointed globe which hangs below banana clusters should be cut off to get larger bananas, the very inside of the trunk is edible (I haven't tried it yet); banana flowers, which are normally eaten as a complement to a dish as a side vegetable, can be eaten raw or cooked. You can steam, fry or boil them. Lastly: when you take a bunch of bananas, you might as well cut down the whole tree. Cut it up and put the pieces between other trees for moisture and fertilization.
Farmers will level banana fields and plant baby ones; I prefer to let nature take its course. When trees get dark inside (only the white interior is edible) or otherwise unhealthy, it can be a good idea to thin out the trees, and separate young ones for transplanting (a mixture of soil, carbon cinder and rice husk is good). A tree cut in half will often sprout new leaves, which is OK, but baby trees are better. 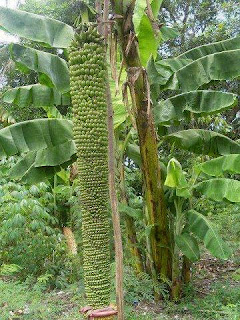 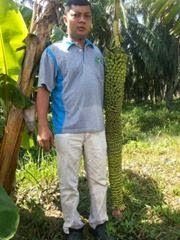 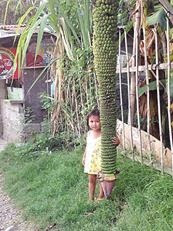 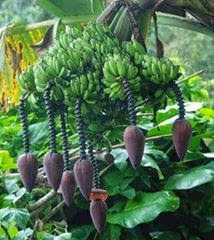 Posted by Mythorelics at 4:10 AM No comments: