One of our dogs caught a baby mynah bird learning to fly. The kids brought it home and our next door neighbor gave us a small cage, which we used the first night. My wife's mother and grandmother, true-life jungle people, were here, and my mother-in-law stuck food down the little thing (about 2 inches wide and three long - was longer but the tail feathers fell out) with a toothpick. It was allowed outside, wandered about in the grass some. I brought it in - it really can't travel well! But due to it objecting to me (it didn't yesterday; too hungry and scared I guess) I was able to get food into its open mouth. One pellet didn't go down (mixed with banana made too big a lump I guess) so I tried the heimlick maneuver, then resorted to pouring a capfull of water down. Seems to have worked. The poor guy sure quieted down. Tired, I think...
We put it in a basket with one of the remarkable fancy nests one sometimes finds about here – see second photo … but due to very cool rain, it’s now back inside, sleeping with head tucked under wing.
A Facebook friend from Australia sez: “The common Mynah is a very serious threat to the survival of many parrots. It is illegal to release one into the wild… Mynahs… deprive the other birds form nesting sites… love humans and their food scraps… have been called feathered cane toads by many biologists.” Another FB friend: hummingbirds “can fly 500 miles without stopping. Black birds eat them… The black bird she pointed to could be a raven. They sometimes fly with their mouths wide open.”

When i first came here, 1988, the area was still largely forest, the population was small, few roads were even paved and most houses were wood. Now there are "metaled" roads everywhere, lots of cement shop-houses built 20+ years ago and never ever used, and ubiquitous wi-fi. We do have lots of national park, more than any other province, which I am glad of, but the forestry department competes well as most graft-filled (police, state railway and a few others run about neck and neck) and schools are mostly for nationalistic indoctrination. Our world's a mess; I think Chiang Rai is one of the finest places in it. But I will eventually release the crow or myna. If it chooses to stick around, that's OK too. 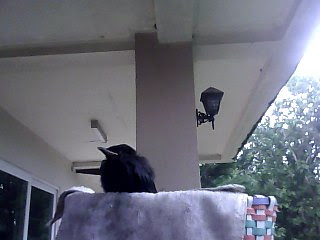 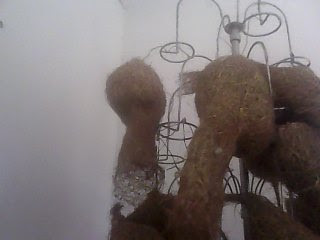 sorry about the picture quality. cameras having become obsolete, one uses hand-phones, but I don't. With much exasperation (!) I took those shots with an old lap-top...

When I was a kid, both in Decatur GA and Ft Wayne IN, local hardware store had a mynah on a post and it could say a few words. Light chain around a foot, though

A friend adopted a baby bird, raising it until it could go off on its own. She ran an outdoor bar, where I'd sometimes sit. The little bird would fly down to visit... she'd feed it sunflower seeds from her mouth.
Posted by Mythorelics at 12:03 AM No comments:

Here in Chiang Rai, Thailand, between WiangPaPao and MaeSuai on Rt 118, at Ban MaePrik, is a Phra Naresuan shrine. At the back is a huge map purporting to be of King Naresuan’s empire, about 1600 CE. The area claimed for him is huge, encompassing Laos, much of Burma, a lot of Yunnan, the Thai/Malay isthmus and of course all of present Thailand. The map is a result of nationalist fantasy. The concept of a country, or of geographical boundaries, didn’t exist here back then. A king ruled people, including other kings (often relatives), not area. Tribute was paid, and this gets misinterpreted as a kind of tax affirming subject status. But were this the actual case, Southeast Asia would have been a part of China. No-one claims that.
The reason I’m bothered about this is another map, purportedly of the Khmer Empire of 900 CE, which includes all of Laos, some of Vietnam and Yunnan, and a lot of the isthmus. It’s ridiculous. Wikipedia, which shows that map (it also appears elsewhere on the Net), has become used as a propaganda device, manipulated, censored and sometimes controlled by powers with other concerns than truth. For instance, try finding out about the nefarious influence the sugar industry on international politics. You won’t get much of its sordid history. Or look up Armenia. You’ll no longer find that that country has been in four separate, non-contiguous locations. Explanation of WWI as the result of power vacuums resultant from decadence and decline in the Asutro-Hungarian and Ottoman Empires should surely be easier to find. The internet isn’t supposed to be this way.
We need to be able to return to the challenges of conflicting viewpoints and messages, varied interpretations of information, and the right of people to challenge authority. But authority, as ever in the clutches of power madness, strenuously disapproves of that. Stuff needs to be swept under the rug or otherwise hidden away, so that the status quo will only be changed in the direction of, well, of destabilizing the power system by too rigorously reinforcing it.
Human power is never permanent. No matter what it does, power can’t stop change, can’t dictate what is real, and can’t reinvent the world. People in Laos KNOW they were never ruled by Khmers (well, except in the far south). People here in Chiang Rai, and north of here, know this too. Most interested historians also know it.
When fact presentation becomes overly influenced by special interests (nationalism, self-interest, corporate greed) instead of based on unbiased faith in truth as instrumental for the greater good, we get knowledge stratification at best, or, far too often, knowledge suppression. An inability to share is also an inability to enjoy the true fruits of labor, inspiration and intelligent, dedicated focus.
To understand the rise and fall of empires, the migrations of peoples, changes in linguistic usage and awareness, to truly know anything of our development, it’s necessary to contain the ego and stifle many desires. That the result can be worth it needs no proof.
The dark, curly-haired populace of Oc Eo and Funan were surely people who followed coastlines (back then lower) from Africa to Australia. They are no longer much in evidence in Cambodia, and one reason is wars of conquest which brought in other peoples – often highland ones.
Trying to administer distant peoples was only a recent folly; Angkor never tried to rule northern Laos, or the Thai/Malay isthmus. There is no reason to think they could have. Even Naresuan didn’t try to administer what he “conquered”! It was understood that distance from power-centers lessens power.
Much published research isn’t available to me; Amazon doesn’t want to ship here (Thailand) and purchasing electronic downloads sight-unseen makes little sense to me. I can’t afford it anyway, not and feed my children. It would be nice if the internet would provide better forums for discussion, but I suppose that would require an absurd new form of ‘peer-review’: deciding who has the right to the attention of whom.
Posted by Mythorelics at 11:59 PM No comments: